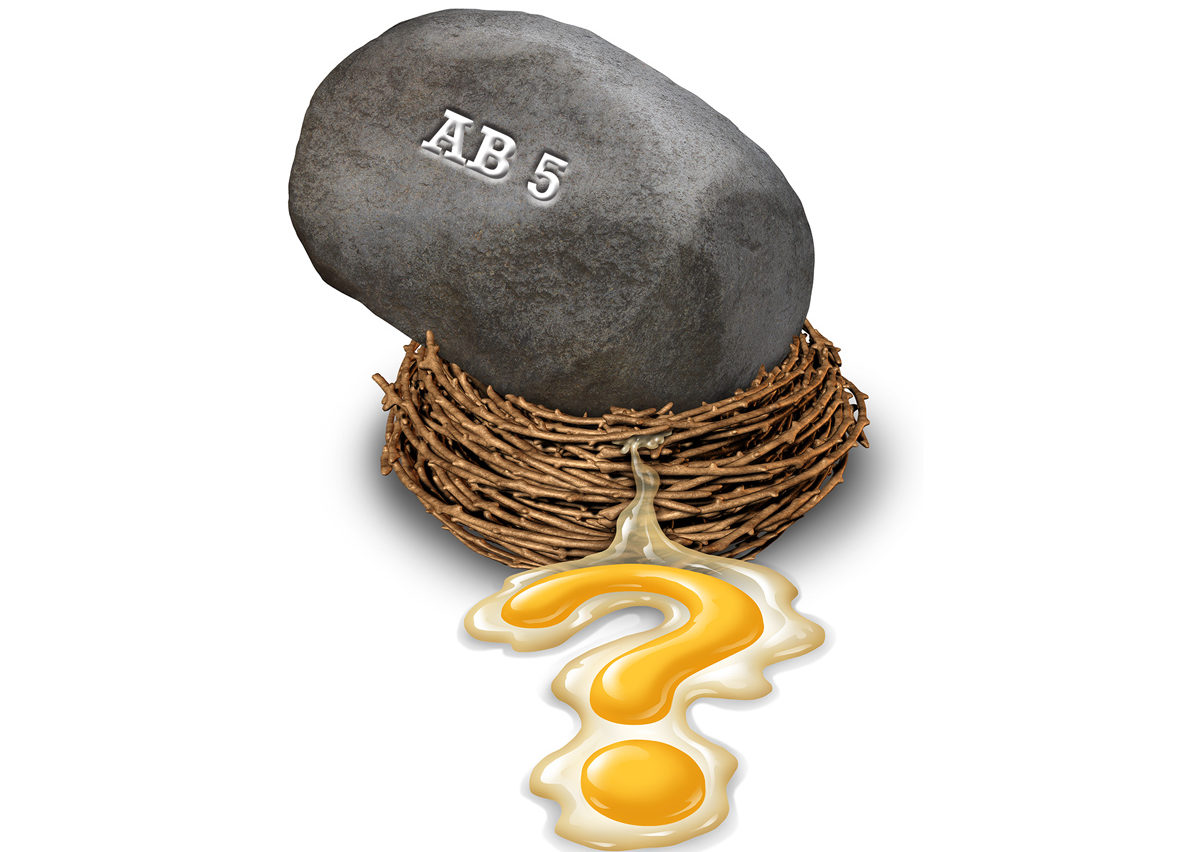 California’s controversial independent contractor law suffered its first two legal setbacks in January after trucking firms and independent truckers were able beat back at the new law in court arguing that the ABC Test should not apply to them.

On Jan. 8, a Los Angeles County Superior Court judge ruled that AB 5 does not apply to independent truckers because they are covered by federal law.

And on Jan. 13, a federal judge extended a restraining order for the law to cover truckers as of Jan. 1 this year in a case brought by the California Trucking Association, seeking a preliminary or permanent injunction on the new law.

Since it was signed into law, AB 5, which took effect Jan. 1, has been highly controversial. It was mainly written in response to the gig-worker economy and targets companies like Uber and Lyft, whose drivers are classified as independent contractors.

AB 5 codified a 2018 California Supreme Court decision, in the Dynamex Operations West, Inc. vs. Superior Court of Los Angeles case, that set new rules for how to classify independent contractors.

The new law has put into place a stringent “ABC test” for determining the validity of independent contractor relationships. This is because one of the requirements, the “B prong,” prohibits companies from using independent contractors unless the worker was performing work “outside the usual course of the hiring entity’s business.”

Because of this broad reading of what does and does not constitute an independent contractor, the law has had a spillover effect on musicians, freelance writers and a host of other professions. Like truckers, many of the people in these professions want to keep their freelance status for fear of losing their work, which is exactly what has happened.

The Dynamex ruling and AB 5 essentially state that workers who perform the work the company is in business to do are in fact employees and cannot be paid as independent contractors.
The distinction is important because employees are eligible for additional benefits and protections, and employers have to pay additional taxes for employees. Employees have rights to minimum wage, overtime and sick leave, among other benefits.

The law has not only raised the hackles of businesses, but also of independent contractors. In the truckers’ case, independent truckers value their freedoms and they invest more than $100,000 in their rigs to do their jobs.

There are more legal challenges to the law. Freelance writers and photographers filed suit in December 2019, alleging that AB 5 unconstitutionally restricts free speech and the media. Uber and Postmates filed suit alleging that the law’s targeting of app-based workers and platforms violates the Equal Protection Clauses of the United States and California Constitutions.

On top of that, Uber and Lyft have pledged $30 million to back a ballot initiative to overturn the law.

By now, if you use independent contractors you should have reviewed all of their statuses and that in order not to be considered employees, they:
A) Must be free from the company’s control when they’re on the job;
B) Must be doing work that falls outside the company’s normal business; and
C) Must be operating an independent business or trade beyond the job for which they were hired.

Some of the occupations and companies impacted by AB 5 are:

The number of companies offering health insurance to their employees has risen for the first time in a decade, according ...

Since the regulations were introduced in October 2013 authorizing employers to allow their employees to carry over up to $500 ...