Cal/OSHA has delayed enforcement of its crystalline silica safety standard for the construction industry for another three months to ensure the California rules are in synch with federal rules on the dangerous airborne matter. The move came after Fed OSHA announced April 6 a delay in adoption of the crystalline silica standard for the sector “to conduct additional outreach and provide educational materials and guidance for employers.” 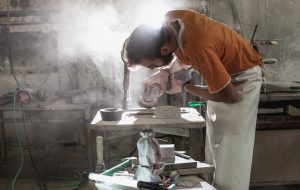 The silica rules have already been in effect for general industry since 2016 and the delay in enforcement is only for the construction industry. Enforcement for the construction sector was slated to start June 23, but that’s been changed to Sept. 23 under the new order. Under the new silica standard, the permissible exposure limit is 50 micrograms per cubic meter of air, compared to the old standard of 100. The California standard is similar to the federal standard, which the industry is challenging in a federal lawsuit. One outfit, the American Chemistry Council, wrote to the Cal/OSHA standards board that the 50 micrograms level is unnecessary and that the current standard, in place since 1971, has markedly reduced the cases of silicosis.

Industry has complained that the cost of complying with the new standard for employers nationwide will be about $6 billion, although Fed-OSHA says it will cost $371 million for employers to fall in line. The sticking point for the federal construction silica rule is that it requires wet cutting of silica-containing materials to reduce the chances of particles in the air. The California rules allow for wet cutting and dry cutting with vacuum saws that suck in the particles before they escape into the air. Contractors would rather cut dry rather than wet.

Fed-OSHA’s requirements were also scheduled to take effect on June 23, but the agency announced that implementation would be delayed by three months to give industry a chance to provide data showing that dry vacuum cutting is just as safe in reducing crystalline silica dust as wet cutting. While Cal/OSHA’s move only delays enforcement, the silica rule is already on the books and employers should comply with it.

All construction employers covered by the standard are required to:

If you have not started complying, you should get your new safety protocols in place now. You have an additional three months to do so.

What to Do with an Old Life Insurance Policy

As people prepare to retire, it’s not uncommon to find an old life insurance policy in their portfolio. Sometimes the ...

Recent studies have shown that telemedicine can yield significant savings for group health plans and covered employees – but only ...

The Next Wave in Workplace Safety: Wearables

As our workplaces and operations continue to evolve, the next frontier is wearable technology for workplace safety. Some companies have ...