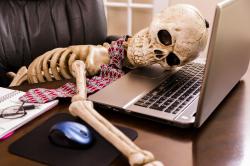 While injuries and deaths that occur while someone is carrying out their work on behalf of their employer are compensated by workers’ comp coverage, not all workplace injuries or deaths are compensable, as a recent court case shows.

In the case, a heating and air conditioning technician died of a heart attack while working in an attic. But his wife was denied workers’ comp death benefits by the insurance company and a workers’ comp judge on the basis that the heart attack was not related to work.

The decision by the judge was appealed and a state court recently ruled that this was not a case for workers’ comp benefits despite the wife’s argument that the employer knew the technician was feeling bad when he arrived at work and should not have sent him to work in an attic space.

But the case could have gone the other way had the technician’s supervisor acted differently.

In the case of Lisa Kelly vs. Workers’ Compensation Appeals Board in Pennsylvania, the technician, upon arriving at work, told his supervisor that he was feeling weak, tired and had a kink in his neck from sleeping poorly the night before.

His supervisor told him that he could take the day off if he was feeling poorly, but Kelly said he would continue working. Still, the supervisor gave him a light duty assignment in consideration of how he was feeling.
While the technician was laying a thermostat wire in the attic of the building, other workers heard moans and climbed the 15-foot ladder to investigate. They found the technician lying incoherent on the floor thrashing around on the drywall between the trusses, and making babbling sounds while bleeding from his head, face and leg.
An ambulance transported Kelly to a local hospital, where he was pronounced dead. The autopsy findings revealed the presence of coronary artery disease, coronary heart disease, atherosclerotic heart disease, and ischemic heart disease.
Kelly’s widow filed a workers’ comp claim for survivors’ benefits, claiming his heart attack had occurred as a result of his employment.

She backed up this claim by stating that he didn’t have any health problems, didn’t complain about chest pain, never saw a heart doctor and wasn’t on any medication. But she did acknowledge that her husband had smoked a pack a day for the last 30 years.

The company denied the claim and she took the case before a workers’ comp judge, and later to appeal at the state court level.

Why the employer is not on the hook
The court noted that the plaintiff had failed to show the two underpinnings of a workers’ comp claim:
• That the death arose in the course of employment, and
• That the death was related to employment.

Kelly’s supervisor and other workers all said that the work the technician had been assigned was not strenuous work, like much of the other work they engage in.
The doctor said that the autopsy indicated that the technician had been suffering from insufficient blood flow to the heart eight to 12 hours before coming to work, and that he was at risk for a heart attack regardless of what he had done that day.

The takeaway
Workers’ comp attorneys say this case could have gone the other way had the supervisor not acted appropriately. In this case, he did the right thing by offering to send Kelly home for the day and, when the worker refused, he was instead assigned light duty.

While employers are responsible for keeping their workers’ safe, they cannot do much about their underlying health problems.

Business owners who form a corporation or a limited liability company (LLC) may question the need for the business to ...

Oct. 15 is the official start of open enrollment for Medicare and Medicare Advantage and you should take stock of ...

Budgeting and Prepping for Open Enrollment

If you are running a business, you need to get an early start on preparations for your small group health ...